Italy, Vajont “tsunami” and Malborghetto-Valbruna floods: such different lessons from the past

Luckily, past mistakes can sometimes be useful for present or especially future decisions. This can apply to spatial planning and management in response to natural disasters and extreme weather events.

In this field the role of people living in a given territory and their participation in decision making processes could be crucial in reducing and better managing the major negative effects of natural catastrophes.

Italy is a country with a high landslide risk: 82% of the municipalities are at a high hydrogeological risk. In this context, two historical tragic events, due to natural disasters, have shown that the role played by the local communities did make a difference in saving lives. 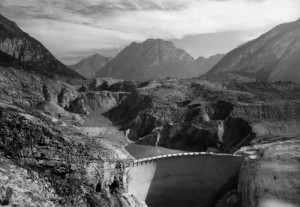 A piece of mount Toc collapses into the Vajont dam causing more than 2000 victims and washing away vil­lages and communities. It has been defined by the United Nations as “the most severe natural disaster in the world caused by human error”. The “Great Vajont” hydro­electric project aimed to transform the valley of the Piave river into a giant source of hydropower for Italy, disregarding  the historically known instability of the mount, on which the dam was built. ‘Toc’ in fact, in the dialects spoken in the valley means both “piece” and “rotten”.

“The Vajont case represents the failure of a State-centred approach and a very bad example of public-private collusion, ignoring experience and traditional knowledge, and not including local development criteria for decision making. This is why it’s an important example to be taken into account for future developments of territorial management”, comments Giovanni De Lorenzi, Director of the Vajont Foundation, who concludes: “It was an intentional slaughter caused by man and not simply a disaster caused by negligence as it has always been suggested”.

Since the 1950’s, the local communities, had never been involved in any territorial spatial management decisions. Their protests were largely disregarded because all that was traditional, unscientific and they were therefore ignored and branded as old fashioned instead of as “development”.

The dominant communication model between science and lay people at that time assumed that scientists and experts were sources of absolute authority, whilst the local inhabitants had no relevant knowledge and needed to be educated.

“Vajont was a lesson, not only for field experts or engineers. It was the mirror of a society in which the population is a victim with no role, and completely excluded from binding technical decisions. Local inhabitants are the most expert witnesses; elderly generations provide the informal but real database on the evolution of the environment at local scale. Vajont was the most impressive example of this. Entire villages wiped out, people robbed of their past and victims of the system”, concludes Simone Frigerio. 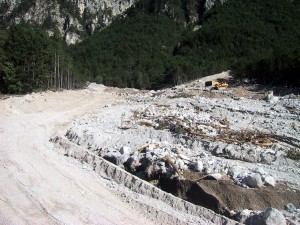 A severe flash flood throughout the Fella river basin hits the village as a result of two extreme events: a storm (355 mm of rainfall within 3 to 6 hours) and the condition of the soil, extremely dry after an anomalous drought. The water transported sediments, stones, shrubbery and trees into the village and within 2 hours 100 houses were buried. The flash flood claimed two lives and caused almost €1 billion’s worth of damage. Approximately 600 residents had to be evacuated.

“Malborghetto-Valbruna represents a model of recovery and reconstruction. The dialogue between citizens, the local authority and Region has been very intense and constant, underlying the crucial role played by municipal authorities in fostering and developing social capacities to face adverse events”, explains Chiara Bianchizza, researcher at the Institute of International Sociology (ISIG), Gorizia, Italy, and partner of RAIN, a EU collaborative project on the quantification of complex interactions between weather events and land-based infrastructure systems.

In this multi-disciplinary consortium the ISIG brings in its expertise on evaluating social variables that contribute to the vulnerability/resilience of a community exposed to natural hazards.

“Despite the lack of communication infrastructures (the highway was closed immediately after the flood), the informal network of Malborghetto-Valbruna with neighbouring municipalities allowed for a prompt intervention and rescue activities. Malborghetto-Valbruna has in fact a strong tradition of volunteer civil protection (at least a member of every family of the local community is part of the civil protection) and of collaboration with volunteers from neighbouring municipalities in Slovenia and Austria”, adds Chiara Bianchizza.

“An informal cross-border network proved to be effective in determining the resilience of a system that would otherwise have been more seriously impaired by the absence of communication infrastructures”, she says, “This is why ISIG promotes a view of vulnerability/resilience that is not only infrastructure-specific, but mostly context-based and context-related”, she concludes.