The cost of blackouts in Europe 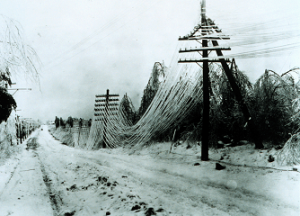 In January 2005, a severe storm swept across Northern Europe, from Ireland to Russia. More than 500,000 homes were left without power, with Denmark and Southern Sweden being particularly hard-hit. And five nuclear power plants had to be shut down due to saltwater seeping into electricity distribution plants.

Extreme weather events are a serious threat to electricity infrastructure.

According to a report by the organisation Climate Central, weather-related blackouts doubled between 2003 and 2014 in the United States. And heavy rainfall, windstorms, heat waves and droughts are set to become even more frequent and severe in the future.

Grid operators should thus include provisions for climate change in their plans, says Gerard Dijkema, Chair of Energy Systems and Industrial Ecology at the University of Groningen, The Netherlands. “Electricity grids have long lifetimes. You need to think about what could happen in 2050,” Dijkema says. In his view, a first step would be to heighten awareness of potential scenarios.

Crucially, to make operators and policy makers engage in a debate, “you need to assess the financial repercussions of power outages on people and industry,” says Johannes Reichl, scientist at the Energy Institute at the Johannes Kepler University Linz, Austria. When numbers are put on losses, it is possible to estimate where and how much money should be spent to increase the resilience of electricity infrastructure.

Previous blackouts in Europe have had severe consequences. For example, in September 2003, a tree fell on an important power line in Switzerland. The effects rippled down to Southern Italy, causing around €1.2 billion worth of damage. About 56 million people mainly in Italy but also in Switzerland were without power for several hours.

In recent years, both policy and grid operators have worked on improving the reliability of electricity infrastructure. In Central Europe, “the security of power supply is higher than ever before,” Reichl says. But the trouble is that “extreme weather events affect electricity infrastructure in a non-linear way,” he adds. The point at which severe damage occurs may be reached quickly, he says.

To prepare for the challenges of extreme weather, scientists are simulating probable scenarios of the effects of such events in real contexts. “We forecast grid usage and simulate how many people will be affected,” says Milenko Halat, a physicist and consultant working for the information technology and software engineering company AIA based in Barcelona, Spain. The number of hours without electricity and the vulnerability of different groups are also indicators for the social impact.

However, while it is relatively straightforward to roughly estimate the costs of a blackout for business and industry, it is hard to assign a monetary value to the impact on private homes. There are different approaches to overcoming this hurdle, says Xavier Clotet, a physicist also working for AIA. These include asking affected people how much money the outage has cost them, or how much money they would be willing to pay in order to avoid an outage.

Halat and Clotet work on such a modelling approach as part of the European research project RAIN. The aim is to provide a “tool to assess user-defined events and contexts,” Halat explains. Ultimately, the information gained from the project can support decision makers and electricity infrastructure owners in making European grids climate proof.

Indeed, it is up to policy makers to facilitate investments in the security of power supply, Reichl points out. The future challenge is to tackle the issue on a European level, both in technical and administrative terms, he concludes.