Privacy vs security: which one are we willing to sacrifice? 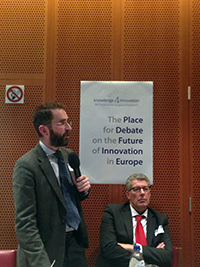 On December 8th 2015, the RAIN consortium participated in the debate about future research ideas for ‘Safety and Security in Critical Infrastructures’ at the Knowledge4Innovation Forum at the European Parliament in Brussels.

The summit was organised in cooperation with the Delft University of Technology, and the Rector Karel Luyben welcomed the audience, explaining that safety and security are top priorities for the European Union and it requires to maintain an open dialogue with researchers, scientists and engineers on safety, security and stability within the EU and beyond. Cora Van Nieuwenhuizen, member of Group of the Alliance of Liberals and Democrats for Europe launched the dinner debate with the desire that awareness and trust become keywords when we speak about risk and safety.

At the RAIN table, the debate was focused on Critical Infrastructures and Big Data.  Our vision is that an integral, big-data based and multidisciplinary scientific approach, in a broader socio-technical context, incorporating technical, human and organizational factors, covering the full safety chain of pro-action, prevention, preparation, repression and after care, as well as covering the full life cycle of plan, design, build, operate, maintain, can increase the overall safety, reliability and security of our critical infrastructures and as society as a whole.

The debate went on with a challenging question from Mr. Koen de Pater, Policy officer for valorisation at European Commission: are we willing to give up our privacy, to increase our safety?

RAIN participant Pieter van Gelder posed the question whether big data has made society safer over the past 10 years? He recommended that EU wide databases should be set up to collect data from large numbers of case studies, so that learning and evidence-based decision making becomes possible. Incentives should be developed to stimulate further public and private partnerships and to prevent possible negative influences of the big data trend.

RAIN coordinator Alan O’Connor drew the conclusions at the debate: perhaps influenced by the  sorrowful events in Paris, at the RAIN table the majority stated that “privacy is important, but safety is more important”.